The Enigma of Automobility: Democratic Politics and Pollution Control (Paperback) 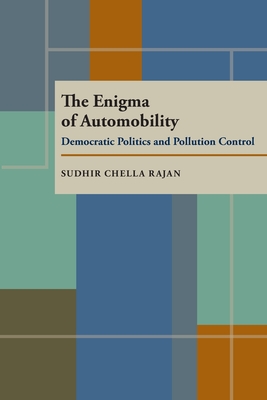 The Enigma of Automobility: Democratic Politics and Pollution Control (Paperback)


In stock at publisher: Usually Ships to store in 3-5 Business Days.
Rajan investigates air pollution policy as one based on how to make cars less polluting. Putting the onus on auto manufacturers and owners has generated an elaborate scheme of emissions testing and pollution-control devices, and does not look at the technology itself as the heart of the problem. Rajan focuses his study on data collected in Los Angeles, to show how emissions testing burdens the poor, who tend to own older cars that pollute more. Rajan argues for democratic control over technology, steering it away from special interest groups and toward a long-term ethical resolution.
Sudhir Chella Rajan is professor at the Indian Institute of Technology, Madras.
“To deal with the social disorders created by car dependency requires some common understanding, agreement and collective action. . . . Rajan points out cogently that any form of regulation which targets high-emission vehicles will tend to fall disproportionately on the poor, who are forced to rely on the oldest, most poorly serviced cars. . . . Rajan succeeds in conveying some of the tangled intractability of this overarching problem.”
—Times Literary Supplement

“A critical analysis of an increasingly important approach to the problem of automobile pollution:  the effort to identify the relatively small number of vehicles with inadequate or defective pollution control devices. . . . The most polluting vehicles are also the oldest and therefore the least expensive. Not surprisingly, they tend to be disproportionately owned by less affluent, often nonwhite motorists. . . . By placing both the blame and the burdens of compliance on them, we conveniently avoid having to come to grips with the broader social implications of our structural dependence on the automobile for urban transportation.”
—Annals of the American Academy of Political and Social Science

“Rajan's work adds to the growing chorus calling for a shift of focus away from limited technological fixes, to the social and political factors which sustain burgeoning automobility. . . . An excellent account of the limitations of technology-political and social, as well as technical limitations—in dealing with automobility.”
—Capitalism Nature Socialism