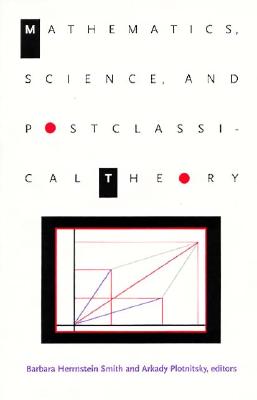 
In stock at publisher: Usually Ships to store in 3-5 Business Days.
Mathematics, Science, and Postclassical Theory is a unique collection of essays dealing with the intersections between science and mathematics and the radical reconceptions of knowledge, language, proof, truth, and reality currently emerging from poststructuralist literary theory, constructivist history and sociology of science, and related work in contemporary philosophy. Featuring a distinguished group of international contributors, this volume engages themes and issues central to current theoretical debates in virtually all disciplines: agency, causality, determinacy, representation, and the social dynamics of knowledge.
In a substantive introductory essay, the editors explain the notion of "postclassical theory" and discuss the significance of ideas such as emergence and undecidability in current work in and on science and mathematics. Other essays include a witty examination of the relations among mathematical thinking, writing, and the technologies of virtual reality; an essay that reconstructs the conceptual practices that led to a crucial mathematical discovery-or construction-in the 19th century; a discussion of the implications of Bohr's complementarity principle for classical ideas of reality; an examination of scientific laboratories as "hybrid" communities of humans and nonhumans; an analysis of metaphors of control, purpose, and necessity in contemporary biology; an exploration of truth and lies, and the play of words and numbers in Shakespeare, Frege, Wittgenstein, and Beckett; and a final chapter on recent engagements, or nonengagements, between rationalist/realist philosophy of science and contemporary science studies.