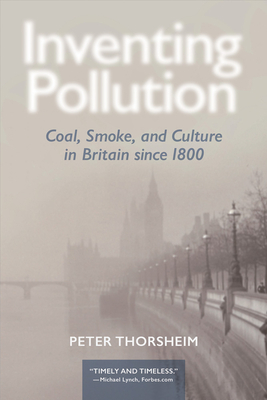 Going as far back as the thirteenth century, Britons mined and burned coal. Britain’s supremacy in the nineteenth century depended in large part on its vast deposits of coal, which powered industry, warmed homes, and cooked food. As coal consumption skyrocketed, the air in Britain’s cities and towns filled with ever-greater and denser clouds of smoke. Yet, for much of the nineteenth century, few people in Britain even considered coal smoke to be pollution.

Inventing Pollution examines the radically new understanding of pollution that emerged in the late nineteenth century, one that centered not on organic decay but on coal combustion. This change, as Peter Thorsheim argues, gave birth to the smoke-abatement movement and to new ways of thinking about the relationships among humanity, technology, and the environment.

Even as coal production in Britain has plummeted in recent decades, it has surged in other countries. This reissue of Thorsheim’s far-reaching study includes a new preface that reveals the book’s relevance to the contentious national and international debates—which aren’t going away anytime soon—around coal, air pollution more generally, and the grave threat of human-induced climate change.

Peter Thorsheim is a professor of history at the University of North Carolina at Charlotte.

“Anybody interested in the story of how an industrial society learned to manage its interactions with the physical environment would benefit from reading Inventing Pollution.”—Business History Review

“The chapters devoted to the late nineteenth and twentieth centuries set a new standard for our understanding of how, in technological, legislative, and local regulatory terms, the behemoth of nineteenth-century smoke fog came gradually to be tamed, only to be replaced by new collective fears of invisible emissions from new industrial processes.”—Journal of British Studies

“Inventing Pollution is a valuable reminder that air pollution was causing environmental, medical, and political controversies long before it became a focus for protests and regulations in the 1960s. By tracing the many responses to ‘smoke pollution’ in the first industrial nation over the past two centuries, Peter Thorsheim has established himself as a leading environmental historian … His book will be of wide interest on both sides of the Atlantic.”—William Cronon, author of Changes in the Land and Nature’s Metropolis

“Drawing on an impressive range of source materials, including some excellent photographs, cartoons, and advertisements, this concise and clearly-written study explores public understandings of air pollution in Britain over the past two centuries.”—Journal of Social History