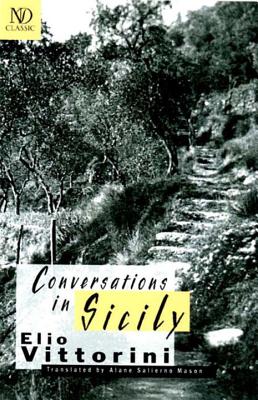 By Elio Vittorini, Alane Salierno Mason (Translated by), Ernest Hemingway (Foreword by)
$15.95
On Our Shelves Now

Conversations in Sicily holds a special place in the annals of literature.

It stands as a modern classic not only for its powerful thematic resonance as one of the great novels of Italian anti-fascism but also as a trailblazer for its style, which blends literary modernism with the pre-modern fable in a prose of lyric beauty. Comparing Vittorini's work to Picasso's, Italo Calvino described Conversations as "the book-Guernica."

The novel begins at a time in the narrator's life when nothing seems to matter; whether he is reading newspaper posters blaring of wartime massacres, lying in bed with his wife or girlfriend, or flipping through the pages of a dictionary it is all the same to him—until he embarks on a journey back to Sicily, the home he has not seen in some fifteen years. In traveling through the Sicilian countryside and in variously hilarious and tragic conversations with its people—his indomitable mother in particular—he reconnects with his roots and rediscovers some basic human values.

In the introduction Hemingway wrote for the American debut of Conversations (published as In Sicily by New Directions in 1949) he remarked: "I care very much about Vittorini's ability to bring rain with him when he comes, if the earth is dry and that is what you need." More recently, American critic Donald Heiney wrote that in this one book, Vittorini "like Rabelais and Cervantes...adds a new artistic dimension to the history of literature."

Here the feeling of the country and the character of the mother are quite marvelous.
— Publishers Weekly

This reprint retains the introduction by Hemingway that
appeared in the 1949 U.S. edition. That's worth the price alone.
— Library Journal