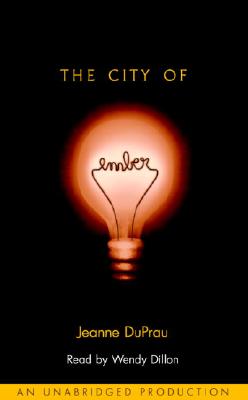 The city of Ember was built as a last refuge for the human race. Two hundred years later, the great lamps that light the city are beginning to flicker. When Lina finds part of an ancient message, she’s sure it holds a secret that will save the city. She and her friend Doon must decipher the message before the lights go out on Ember forever! This stunning debut novel offers refreshingly clear writing and fascinating, original characters.

“DuPrau’s first foray into fiction creates a realistic post-apocalyptic world where everyone has lived underground for so long that they assume it has always been that way. . . . Reminiscent of post-apocalypse fiction like Robert O'Brien's Z for Zachariah, DuPrau’s book leaves Doon and Lina on the verge of the undiscovered country and readers wanting more.”—USA Today

“The cliffhanger ending will leave readers clamoring for the next installment.”—Starred, Kirkus Reviews

“While Ember is colorless and dark, the book itself is rich with description. . . . Part mystery, part adventure story, this novel provides science fiction for those who do not like science fiction.”—Starred, VOYA