Nature of the Rainforest: Costa Rica and Beyond (Zona Tropical Publications) (Paperback) 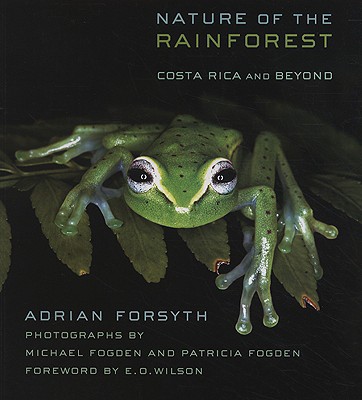 Nature of the Rainforest: Costa Rica and Beyond (Zona Tropical Publications) (Paperback)

A Zona Tropical Publication"The words 'tropical rainforest' may conjure up vistas populated by jaguars, brilliant macaws, and flowers amid the grandeur of towering buttressed trees. But the eager, expectant visitor is not regaled with the sight of charismatic vertebrates, gaudy birds, and luminous orchids. In the rainforest, close encounters with life that moves are usually rare but brilliant episodes; one is bedazzled for an instant and then left alone in the quiet greenery. Under such conditions, one must see the episode as part of a process; tracing the connections between organisms is the essence of rainforest appreciation."--Nature of the RainforestNature of the Rainforest is a breathtaking tour of an environment that is the pinnacle of biodiversity and evolutionary sophistication by an award-winning author and two photographers who love the rainforest, understand its intricacies, and have spent considerable time there documenting its wildlife and complexity. Adrian Forsyth draws on four decades of personal encounters with the animals of the rainforest--including poison-dart frogs, three-toed sloths, bushmasters, and umbrellabirds--as a starting point to communicate key ecological topics such as biodiversity, coevolution, rarity, chemical defense, nutrient cycling, and camouflage. The luminous photographs capture stunning and rare creatures in action, including the now- extinct golden toad mating, a jaguar on the prowl, and the hermit hummingbird feeding. The behaviors and characteristics of the rainforest inhabitants featured here not only illustrate the text but also advance the scientific narrative and exemplify the critical importance of conservation. Thematic chapters are interspersed with four chapters devoted to specific habitats and regions of Costa Rica and Peru, areas with some of the most diverse arrays of plant and animal species in the world. The result is an exuberant celebration of the rainforest in text and images.

Adrian Forsyth is an internationally renowned biologist, conservationist, and nature writer. He is the author of Tropical Nature, The Natural History of Sex, The Nature of Birds, Exploring the World of Insects, and Mammals of North America. He is President of the Amazon Conservation Association and a research associate at the Smithsonian Institution. Michael Fogden and Patricia Fogden are world-acclaimed nature photographers. Since 1979, they have lived for about half of each year in Monteverde, using their home as a base for photography excursions throughout Costa Rica. They are the authors of Animals and their Colours and Costa Rica: Wildlife of the National Parks and Reserves. E. O. Wilson is Pellegrino University Research Professor in Entomology in the Department of Organismic and Evolutionary Biology at Harvard University and the author most recently of The Creation: An Appeal to Save Life on Earth.