The Galactic Quests of Captain Zepto: Issue 1: The Island of Doom (Paperback) 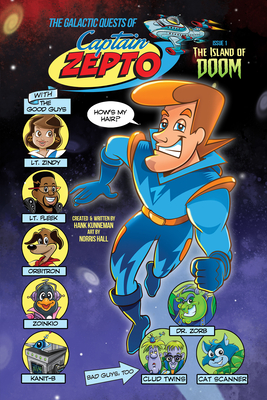 The Galactic Quests of Captain Zepto: Issue 1: The Island of Doom (Paperback)


In stock at publisher: Usually Ships to store in 3-5 Business Days.
Strap on your rocket boots and step into the exciting, quirky, and always hilarious universe of Captain Zepto In this first issue of The Galactic Quests of Captain Zepto, things are looking very grim for the galaxy. The evil Dr. Zorb has unleashed fear on people across the earth.

Who will save the day? Captain Zepto, of course

Together with his galactic-sized ego and other members of the Light Brigade, the captain sets off to defeat Dr. Zorb and his wicked plan.

But the team quickly discovers that they need more than their expert teamwork and Zepto's immovable, flawless hair - They need more power

How will the crew conquer Zorb and his menacing mission? Where can they turn for help? Will Zepto's suit need to be dry-cleaned after the battle?

Blast into a thrilling adventure that's out of this world.
Hank Kunneman has had a passion for cartooning and art since childhood. While he has authored numerous books for adults, he has also created many children's characters that come to life with biblical principles and lessons that all ages can enjoy. He and his wife, Brenda, pastor Lord of Hosts Church in Omaha, Nebraska. Their weekly show, New Level with Hank and Brenda, airs nationally and internationally, and reaches millions around the world.Norris Hall has illustrated several children's books and his work has been displayed in galleries, museums, and commercial spaces across the United States. His clients include Disneyland Paris, AT&T, Tennessee Performing Arts Center, Nashville International Airport, and numerous schools, libraries, and doctors' offices. He resides near Nashville, Tennessee with his wife, Linda.