If I Die in a Combat Zone: Box Me Up and Ship Me Home (Paperback) 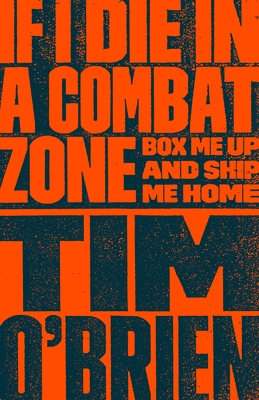 If I Die in a Combat Zone: Box Me Up and Ship Me Home (Paperback)


Backordered: may take 2-4 weeks.
A classic from the New York Times bestselling author of The Things They Carried

"One of the best, most disturbing, and most powerful books about the shame that was / is Vietnam."
—Minneapolis Star and Tribune

Before writing his award-winning Going After Cacciato, Tim O'Brien gave us this intensely personal account of his year as a foot soldier in Vietnam. The author takes us with him to experience combat from behind an infantryman's rifle, to walk the minefields of My Lai, to crawl into the ghostly tunnels, and to explore the ambiguities of manhood and morality in a war gone terribly wrong. Beautifully written and searingly heartfelt, If I Die in a Combat Zone is a masterwork of its genre.

Now with Extra Libris material, including a reader’s guide and bonus content.

Tim O’Brien received the 1979 National Book Award in fiction for Going After Cacciato. His other works include the Pulitzer finalist and a New York Times Book of the Century, The Things They Carried; the acclaimed novels Tomcat in Love and Northern Lights; and the national bestselling memoir If I Die in a Combat Zone. His novel In the Lake of the Woods received the James Fenimore Cooper Prize from the Society of American Historians and was named the best novel of 1994 by Time. In 2010 he received the Katherine Anne Porter Award for a distinguished lifetime body of work and in 2012 he received the Richard C. Holbrooke Distinguished Achievement Award from the Dayton Literary Peace Prize Foundation. He was awarded the Pritzker Literature Award for Lifetime Achievement in Military Writing in 2013.

"O'Brien brilliantly and quietly evokes the foot soldier's daily life in the paddies and foxholes, evokes a blind, blundering war. . . . Tim O'Brien writes with the care and eloquence of someone for whom communication is still a vital possibility. . . . A personal document of aching clarity. . . . A beautiful, painful book."
—The New York Times Book Review

"One of the best, most disturbing, and most powerful books about the shame that was / is Vietnam."
—Minneapolis Star and Tribune