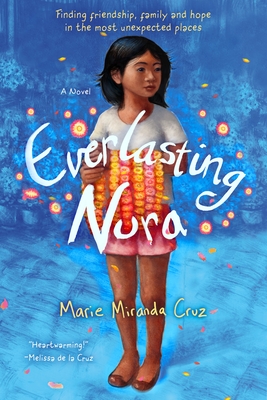 An uplifting young reader debut about perseverance against all odds, Marie Miranda Cruz's debut Everlasting Nora follows the story of a young girl living in the real-life shantytown inside the Philippines’ Manila North Cemetery.

After a family tragedy results in the loss of both father and home, 12-year-old Nora lives with her mother in Manila’s North Cemetery, which is the largest shantytown of its kind in the Philippines today.

When her mother disappears mysteriously one day, Nora is left alone.

With help from her best friend Jojo and the support of his kindhearted grandmother, Nora embarks on a journey riddled with danger in order to find her mom. Along the way she also rediscovers the compassion of the human spirit, the resilience of her community, and everlasting hope in the most unexpected places.

MARIE MIRANDA CRUZ was born in the historic town of Cavite City, Philippines, a city established in the late 17th century of the Spanish Colonial period, and spent a large portion of her childhood and teenage years living around the country. Marie moved to the United States permanently after getting her degree in Biology and currently works as a medical technician. She always held a deep love for children's books and writing; Everlasting Nora is her first novel.

“Heartwarming and fun, with a fresh twist and a diverse cast of characters!” —Melissa de la Cruz, #1 New York Times bestselling author of the Descendants series and Alex & Eliza: A Love Story

“A story of friendship and unrelenting hope. Readers will escape into a world unlike any other, and will be better for it.”—Erin Entrada Kelly, Newbery Award-winning author of Hello, Universe

“Cruz offers an important and engaging tale. At its heart, this is a story about friendship and family—the one we’re born into and the one we make…. This moving title should find a place in all libraries looking for authentic and powerful middle grade stories.” —School Library Journal, starred review

“Nora’s story is a tribute to Filipino children, and readers of all backgrounds will find themselves immersed in the culture, learning bits of Tagalog and longing to savor the delicacies described throughout such as biko, champorado, and banana-que. Cruz’s touching debut breathes life, beauty and everlasting hope into a place where danger lurks and the dead rest.” —Kirkus Reviews, starred review

“Cruz does a wonderful job showing readers a life that many will know nothing about. The description and imagery of life in the cemetery is rich, as the narrative exposes snapshots of various people including other children, families, and even missionaries.…This impactful debut novel shows young readers the devastating reality of life for some children in the world, introduces them to a new language and culture, and demonstrates the power of family and neighbors, courage, hope, and, most of all, perseverance.” —Booklist

“Debut author Cruz doesn’t shy away from Nora’s reality—her unreliable, grieving mother, the family’s extreme poverty, the violence of the gambling world—but she also weaves a story of hope in darkness and creates a courageous, resilient heroine to root for. Cruz’s rich descriptions of Filipino culture, most notably the food, intensify the sense of place and proffer bright spots in Nora’s difficult situation.” —Publishers Weekly