The Devil Dogs at Belleau Wood: U.S. Marines in World War I (Paperback) 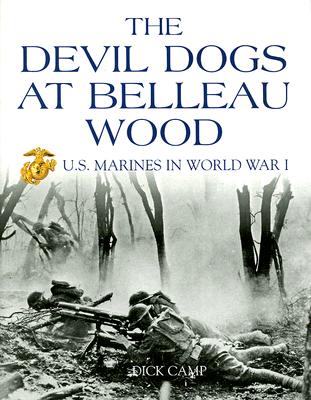 The Devil Dogs at Belleau Wood: U.S. Marines in World War I (Paperback)

Facing massed German machine guns, the Marines made sweep after bloody sweep through Belleau Wood. Repeatedly accosted by the retreating French and urged to turn back, Captain Lloyd Williams of the 2nd Battalion, 5th Marine Regiment, uttered the now-famous retort, "Retreat, hell. We just got here." And indeed, by the end of that terrible June of 1918, the Marines had broken the back of the Germans powerful spring offensive. Their ferocity had earned them the nickname Teufelshunde--Devil Dogs--from their enemies; it also won such admiration from their allies that the French government changed the name of Belleau Wood to Bois de la Brigade de Marine.

The Devil Dogs at Belleau Wood recreates the drama of the battle for Belleau Wood as it was experienced by those who were there. Drawing on numerous firsthand accounts of the month-long engagement, the book captures the spirit of the Leathernecks in desperate battle. It offers a harrowing look at a critical campaign in which, as one soldier says, "men were being mowed down like wheat." And, amidst the carnage and cruelty, it tells the very human story of camaraderie and courage that carried the day.

Rich with the personal insights and observations that bring history to life, the book is illustrated with a great number of photographs, many of which are rare and never before published.

Dick Camp is a retired Marine Corps colonel and the author of Lima-6, his memoir as a Marine infantry company commander at Khe Sanh. He has written several combat histories of the U.S. Marines, including The Devil Dogs at Belleau Wood, Battleship Arizona's Marines at War, Iwo Jima Recon, and Last Man Standing: The 1st Marine Regiment on Peleliu. He is also the author of Leatherneck Legends: Conversations with the Marine Corps' Old Breed and has published over sixty articles in various military-oriented magazines, including Vietnam, World War II, Marine Corps Gazette, and Leatherneck. Camp is currently the vice president for museum operations at the Marine Corps Heritage Foundation, overseeing the National Museum of the Marine Corps in Triangle, Virginia.

"Not one World War I Marine veteran remains; they have all passed into history. But Dick Camp does his part to honor those men and their fearless fighting spirit in The Devil Dogs at Belleau Wood, an account of the Marine Corps' first test of fierce combat in a protracted, foreign war. Camp's approach to the Belleau Wood chapter in history is sound in research and electrifying in its portrayal. His background as a retired Marine colonel and as the author of other well-acclaimed books on the Marine Corps' history provide him with the perspective to retell, and in some cases, disclose, a great deal about one of the more storied campaigns in Marine Corps lore. Camp does an excellent job of depicting the sheer brutality of combat. His descriptive language allows the reader to fully comprehend the macabre face of death. While other WW I classics like Erich Maria Remarque's fictional novel, "All Quiet on the Western Front," have depicted combat at its worst, Camp's work does so, but in a tightly packaged and spirited portrayal that benefits from numerous photographs, maps and quotes from the men who were there. Dick Camp's work on Belleau Wood serves as a blueprint for the Marine spirit, still active today in fields of combat in different parts of the world." - Leatherneck Magazine

"Another new, noteworthy book from Zenith Press that will fascinate the military historian is Dick Camp's Devil Dogs at Belleau Wood...More than one hundred photos accompany the text that offers an account of the month-long engagement that captures the spirit of the Leathernecks in desperate battle." - The Watsonville Register-Pajaronian