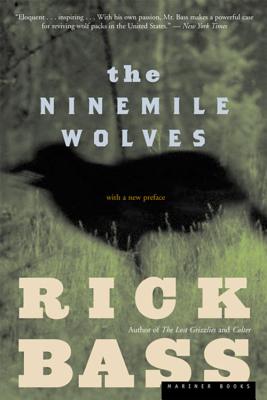 One of Rick Bass's most widely respected works of natural history, The Ninemile Wolves follows the fate of a modern wolf pack, the first known group of wolves to attempt to settle in Montana outside protected national park territory. The wolf inspires hatred, affection, myth, fear, and pity; its return polarizes the whole of the West -- igniting the passions of cattle ranchers and environmentalists, wildlife biologists and hunters. One man's vigorous, emotional inquiry into the proper relationship between man and nature, The Ninemile Wolves eloquently advocates wolf reintroduction in the West. In a new preface, Bass discusses the enduring lessons of the Ninemile story.

RICK BASS’s fiction has received O. Henry Awards, numerous Pushcart Prizes, awards from the Texas Institute of Letters, fellowships from the National Endowment for the Arts and the Guggenheim Foundation, and his memoir, Why I Came West, was a finalist for a National Book Critics Circle Award.