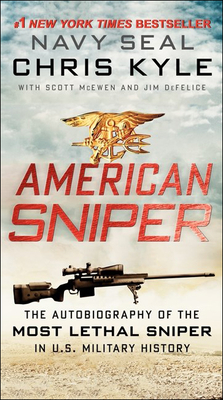 By Chris Kyle, Scott McEwen (With), Jim DeFelice (With)

He is the deadliest American sniper ever, called "the devil" by the enemies he hunted and "the legend" by his Navy SEAL brothers . . .

From 1999 to 2009, U.S. Navy SEAL Chris Kyle recorded the most career sniper kills in United States military history. The Pentagon has officially confirmed more than 150 of Kyle's kills (the previous American record was 109), but it has declined to verify the astonishing total number for this book. Iraqi insurgents feared him so much they placed a bounty on his head. Kyle earned legendary status among his fellow U.S. warriors, whom he protected with deadly accuracy from rooftops and stealth positions. Gripping and unforgettable, Kyle's masterful account of his extraordinary battlefield experiences ranks as one of the great war memoirs of all time.