A Stranger in Your Own City: Travels in the Middle East's Long War (Hardcover) 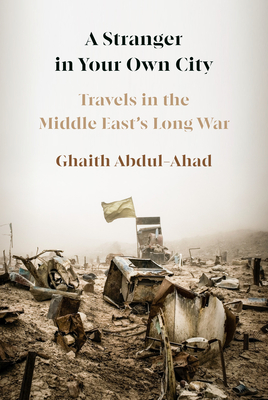 A Stranger in Your Own City: Travels in the Middle East's Long War (Hardcover)


Coming Soon - Available for Pre-Order Now
An award-winning journalist’s powerful portrait of his native Baghdad, the people of Iraq, and twenty years of war.

“An essential insider account of the unravelling of Iraq…Driven by his intimate knowledge and deep personal stakes, Abdul-Ahad…offers an overdue reckoning with a broken history.”—Declan Walsh, author of The Nine Lives of Pakistan: Dispatches from a Precarious State

“A vital archive of a time and place in history…Impossible to put down.”—Omar El Akkad, author of What Strange Paradise

The history of reportage has often depended on outsiders—Ryszard Kapuściński witnessing the fall of the shah in Iran, Frances FitzGerald observing the aftermath of the American war in Vietnam. What would happen if a native son was so estranged from his city by war that he could, in essence, view it as an outsider? What kind of portrait of a war-wracked place and people might he present?

A Stranger in Your Own City is award-winning writer Ghaith Abdul-Ahad’s vivid, shattering response. This is not a book about Iraq’s history or an inventory of the many Middle Eastern wars that have consumed the nation over the past several decades. This is the tale of a people who once lived under the rule of a megalomaniacal leader who shaped the state in his own image; a people who watched a foreign army invade, topple that leader, demolish the state, and then invent a new country; who experienced the horror of having their home fragmented into a hundred different cities.

When the “Shock and Awe” campaign began in March 2003, Abdul-Ahad was an architect. Within months he would become a translator, then a fixer, then a reporter for The Guardian and elsewhere, chronicling the unbuilding of his centuries-old cosmopolitan city. Beginning at that moment and spanning twenty years, Abdul-Ahad’s book decenters the West and in its place focuses on everyday people, soldiers, mercenaries, citizens blown sideways through life by the war, and the proliferation of sectarian battles that continue to this day. Here is their Iraq, seen from the inside: the human cost of violence, the shifting allegiances, the generational change.

A Stranger in Your Own City is a rare work of beauty and tragedy whose power and relevance lie in its attempt to return the land to the people to whom it belongs.
GHAITH ABDUL-AHAD is an Iraqi journalist. Born in Baghdad in 1975, he trained as an architect before he was conscripted into Saddam Hussein’s army, which he deserted. Soon after U.S.-led coalition forces took control of Baghdad in April 2003, he began writing for The Guardian. He has won numerous awards, including the British Press Awards’ Foreign Reporter of the Year and two News and Documentary Emmy Awards. He currently lives in Istanbul.
“Abdul-Ahad’s descriptions of torture and executions, the result of ever-escalating cycles of violence and the breakdown of military discipline, are stomach-churning. But the horrors of war are matched by the author's sympathy for everyday civilians. . . . His reportage is defined by professional courage. . . . There is no silver lining of hope or resilience; just bewilderment and loss, made additionally poignant by the author’s elegant pencil-and-watercolor illustrations.”—Booklist

“In this searing and clear-eyed account of Iraq’s last two decades of conflict Abdul-Ahad expresses the broken-heartedness of a man who loses his country over and again to sectarianism and bloodshed. Abdul-Ahad writes with bitter humour and an unsentimental style, using a cast of characters – militiamen, teachers, torturers and doctors – to illuminate actions that seem almost impossible to understand; His reporting on Iraq strips away any myths and refuses to romanticise or glorify anyone or anything. It is a powerful, unforgettable book.”—Nadifa Mohamed, author of The Fortune Men

“A Stranger in Your Own City is a stunning piece of emotional and psychological topography, charting the many clashing lives of pre- and post-invasion Iraq. Unlike a parade of books that focused predominantly on the Westerners who helped unleash so much of the country’s carnage, Ghaith Abdul-Ahad's centers the people who call Iraq home. Through visceral, sometimes first-hand accounts, he tells the stories of both victims and perpetrators, never retreating into artificial neutrality. This is a vital archive of a time and place in history that, in the post-9/11 age, so many would rather forget, a book that’s at once difficult to read and impossible to put down.”—Omar El Akkad, author of What Strange Paradise

“In A Stranger in Your Own City, Ghaith Abdul-Ahad is the rarest of documentarians. Having grown up in Baghdad before the American invasion, and then having worked for the foreign press, Abdul-Ahad is a stranger in the best sense of the term—a man between regimes, between languages, between even forms of expression. His beautiful line drawings are just as expressive as his trenchant prose. This book reminds us of the human costs of a war that most Americans have chosen to forget.”—Peter Hessler, author of The Buried: An Archaeology of the Egyptian Revolution

“If meaning originates in memory and detail, this formidable book is a supreme artistic act of preservation. It is a biography of a lost Iraq, found within Abdul Ahad’s exuberant and caustic sensibility, tracing the seismic shifts of the past decades through family history, transformed neighborhoods, and an inescapable legacy of state violence. It is fastidious with facts but also passionate empathetic and worldly, to my mind a masterpiece that I forced myself to shut every few pages, so it would last and last.”—Azadeh Moaveni, author of Lipstick Jihad: A Memoir of Growing Up Iranian in America and American in Iran

“A crucial and important new voice, as brilliant, passionate and fearless as he is well-informed, skeptical and nuanced. But Ghaith Abdul-Ahad is also a writer of exquisite prose, whose thoughtful, moving and often disturbing and work elevates war reportage and the memoir of conflict and loss to levels rarely seen since Michael Herr’s Dispatches or James Fenton’s All the Wrong Places. A Stranger in Your Own City is that rarity: a genuine melancholy masterpiece.”—William Dalrymple, author of The Anarchy: The Relentless Rise of the East India Company

“Impassioned, brave and brilliant, A Stranger in Your Own City is an essential insider account of the unravelling of Iraq. Ghaith Abdul-Ahad takes the reader on an unforgettable journey across a country torn apart by the centrifugal forces of history and imperial folly. With an unsparing eye and an aching heart, driven by his intimate knowledge and deep personal stakes, Abdul-Ahad draws a compelling and nuanced account of a nation skittering out of control. Wry yet warm, scathing yet affectionate, the book offers an overdue reckoning with a broken history.”—Declan Walsh, author of The Nine Lives of Pakistan: Dispatches from a Precarious State

“Ghaith Abdul-Ahad is a journalistic marvel and a terrible joy as a writer, never wearying of the world as he maps its cruelties. He’s eloquent and compassionate, vulnerable, scathing and funny when he sketches his personal life as an Iraqi among the American and European press pack, almost unbearably clear when he brings us close to the irredeemable personal injustices of war.”—James Meek, author of To Calais, In Ordinary Time

“Poignant . . . Abdul-Ahad writes meaningfully as he returns to his homeland. . . . A sobering, blistering frontline account of internecine warfare in a region crying for peace.”—Kirkus Reviews (starred review)

“Kaleidoscopic and incisive . . . Abdul-Ahad details bloody sectarian battles, heart-pounding run-ins with ISIS henchmen, and a populace trying to reclaim its city and country from Iraq’s greedy ruling class and those still ‘immersed in their selfish sectarian mentalities.’ It’s a master class in reporting.”—Publishers Weekly (starred review)