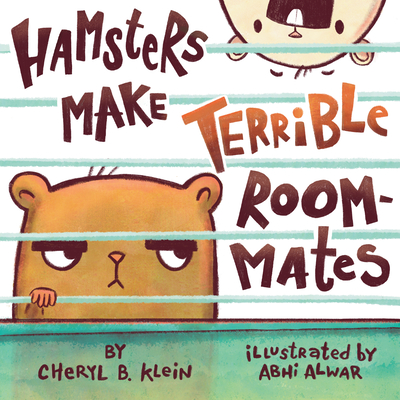 Two hamster roommates with wildly different personalities crammed in one cage--what could go wrong in this hilarious story about introverts versus extroverts?

Cheryl Klein is the author many picture books, including Wings, illustrated by Tomie DePaola, and the adult nonfiction book The Magic Words: Writing Great Books for Children and Young Adults, which received two starred reviews. She lives in Brooklyn, New York.

Abhi Alwar is an illustrator and designer from Chicago who currently lives in NYC and works in children's publishing. This is her debut picture book.

★ "Funny, cleverly building dialogue by Klein . . . Debut illustrator Alwar creates two highly and equally expressive rodent protagonists . . . readers should get a tickle out of how the freewheeling digital compositions open up the tiny world of the hamster cage in unexpected ways." —Publishers Weekly, starred review

"Klein’s pithy storytelling both thoughtfully conveys the introvert-extrovert divide and gently teaches the art of apology. Alwar’s watercolor-textured digital illustrations are funny, expressive, and emotive, with a combination of spot and spread illustrations moving the story along . . . Whether for hamsters or humans, a lighthearted how-to guide to being a good roommate." —Kirkus

"The story’s respect for Henry’s preference for solitude makes this book particularly refreshing; it focuses not on self-sacrifice but on boundaries and how guidelines for time spent together can make a relationship more meaningful . . . a gentle but humorous primer to youngsters on exercising their own agency and respecting that of others." —BCCB

"With a palette that dynamically carries scenes from serene to anger-infused, the illustrations cue preschoolers into the underlying emotions behind the roommates’ misunderstanding. It’s funny, sincere, and teachable . . . Hamsters may make terrible roommates, but Klein and Alwar give beginning readers the path to harmony through honest conversation and admitting wrongdoing." —SLJ