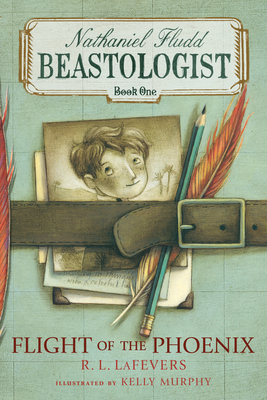 This is book number 1 in the Nathaniel Fludd, Beastologist series.

Nathaniel Fludd’s life has taken a turn for the worst. With his parents lost at sea, he lands on the doorstep of a distant cousin—the world’s last remaining beastologist. Soon Nate is whisked off on his first expedition, to Arabia, where the world’s only phoenix prepares to lay its new egg. When disaster strikes, Nate quickly finds himself all alone.
Will he be able to see the phoenix safely hatched, keep his accidental pet gremlin out of trouble, and rescue his guardian from the Bedouin? If he fails, nothing will stand between the world’s mythical creatures and extinction.
Too bad Nate’s not the sort of boy who enjoys adventure . . .yet.
R.L. LaFevers lives in Southern California. Learn more at her website: http://www.rllafevers.com/


Kelly Murphy grew up surrounded by swamps and marshes that she explored with her six other siblings in southern New England. If you'd like to see more of Kelly's work, please visit www.kelmurphy.com

". . . this American author has crafted an exciting tale. Straightforward sentences, chronological narrative, short chapters and Murphy’s plentiful black-and-white illustrations make this appropriate for middle-grade readers looking for a series to grow with."--Kirkus Reviews "LaFevers (the Theodosia books) gets the Nathanial Fludd, Beastologist series off to a sprightly start with this wry story introducing a 10-year-old orphaned when his parents' airship crashes in the North Pole in 1928 . . . this quick-paced adventure . . . should entice kids to return for Nate's next escapade."--Publishers Weekly