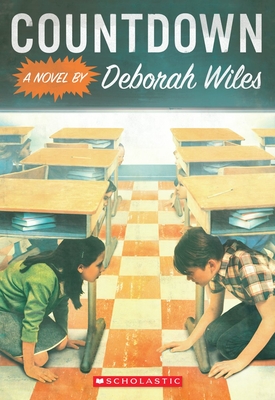 By Deborah Wiles
$9.99
On Our Shelves Now

This is book number 1 in the The Sixties Trilogy series.

“In this fantastic debut historical novel, 11-year-old Franny is growing up in the early 1960s against a backdrop of the Cuban Missle Crisis. What makes this book unique is the nonfiction component that Wiles integrates into the book. Between each chapter there are pages of real images from the 1960s that serve to help the reader better imagine the era.”
— Suzanna Hermans, Oblong Books And Music,LLC., Millerton, NY

Four starred reviews greeted this new, groundbreaking classic from Deborah Wiles!
Franny Chapman just wants some peace. But that's hard to get when her best friend is feuding with her, her sister has disappeared, and her uncle is fighting an old war in his head. Her saintly younger brother is no help, and the cute boy across the street only complicates things. Worst of all, everyone is walking around just waiting for a bomb to fall.
It's 1962, and it seems that the whole country is living in fear. When President Kennedy goes on television to say that Russia is sending nuclear missiles to Cuba, it only gets worse. Franny doesn't know how to deal with what's going on in the world--no more than she knows with how to deal with what's going on with her family and friends. But somehow she's got to make it.

Deborah Wiles is the author of the picture book Freedom Summer and the novels: Love, Ruby Lavender; The Aurora County All-Stars; and Each Little Bird That Sings, a National Book Award finalist, and A Long Line of Cakes. She is also the author of the documentary novels Countdown and Revolution, a National Book Award Finalist, and Anthem. She has vivid memories of ducking and covering under her school desk during air-raid drills at the time of the Cuban Missile Crisis. She also sang in the Glee Club, was a champion speller, and hated Field Day. Deborah lives in Atlanta, Georgia. You can visit her on the web at deborahwiles.com.

Praise for Countdown:
* "Wiles skillfully keeps many balls in the air, giving readers a story that appeals across the decades as well as offering enticing paths into the history." - Booklist, starred review
* "The larger story...told here in an expert coupling of text and design, is how life endures, even triumphs, no matter how perilous the times." - Horn Book, starred review
* "References to duct tape (then newly invented), McDonald's and other pop culture lend authenticity to this phenomenal story of the beginnings of radical change in America." - Kirkus, starred review
* "Wiles palpably recreates the fear kids felt when air-raid sirens and duck-and-cover drills were routine...this story is sure to strike a chord with those living through tough times today." - Publishers Weekly, starred review