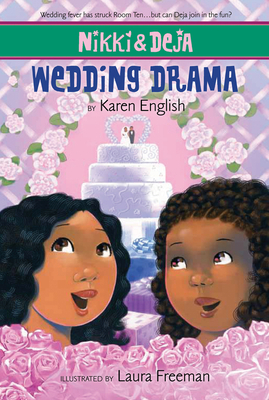 By Karen English, Laura Freeman (Illustrator)
$5.99
On Our Shelves Now

Ms. Shelby is getting married! As the girls in Nikki and Deja's class compete over who can plan the best imaginary wedding for their teacher, Nikki excitedly throws herself into preparations for the real thing. But Deja is not so enthusiastic. Her Auntie Dee has been temporarily laid off from her job, and Deja is worried. What will happen now that Deja can no longer afford a new dress and special hairdo? Will Nikki leave her best friend behind while she shops and primps? Will Deja be able to get over her jealousy and enjoy the celebration anyway? This charming entry in the Nikki and Deja series is now in paperback!

Karen English is a Coretta Scott King Honor Award-winner and the author of It All Comes Down to This, a Kirkus Prize Finalist, as well as the Nikki and Deja and The Carver Chronicles series. Her novels have been praised for their accessible writing, authentic characters, and satisfying storylines. She is a former elementary school teacher and lives in Los Angeles, California.

Laura Freeman has illustrated several books for young readers, including the Nikki and Deja and Carver Chronicles series, and Natalie's Hair Was Wild, which she also wrote. Laura grew up in New York City, and now lives in Atlanta, Georgia, with her husband and two children. www.lfreemanart.com Instagram: @laurafreemanart Twitter: @LauraFreemanArt.

"English manages to convey both the trials that best friends sometimes put each other through as well as how easy it can be to get the relationship back on track. A former teacher herself, English fondly depicts these tried-and-true dynamics." --Booklist