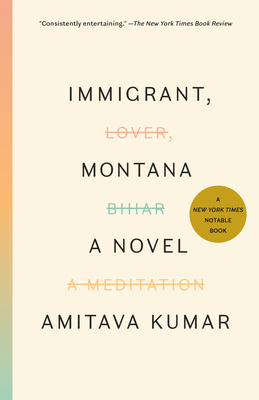 
On Our Shelves Now
A NEW YORK TIMES NOTABLE BOOK

ONE OF THE NEW YORKER’S BEST BOOKS OF THE YEAR

Carrying a single suitcase, Kailash arrives in post-Reagan America from India to attend graduate school. As he begins to settle into American existence, Kailash comes under the indelible influence of a charismatic professor, and also finds his life reshaped by a series of very different women with whom he recklessly falls in and out of love.

Looking back on the formative period of his youth, Kailash’s wry, vivid perception of the world he is in, but never quite of, unfurls in a brilliant melding of anecdote and annotation, picture and text. Building a case for himself, both as a good man in spite of his flaws and as an American in defiance of his place of birth, Kailash weaves a story that is at its core an incandescent investigation of love—despite, beyond, and across dividing lines.
Amitava Kumar is a writer and journalist. He was born in Ara, India, and grew up in the nearby town of Patna, famous for its corruption, crushing poverty, and delicious mangoes. Kumar is the author of several books of nonfiction and a previous novel. He lives in Poughkeepsie, in upstate New York, where he is Helen D. Lockwood Professor of English at Vassar College. In 2016, Kumar was awarded a Guggenheim Fellowship (General Nonfiction) as well as a Ford Fellowship in Literature from United States Artists.
“Consistently entertaining.”
—The New York Times Book Review

“Intelligent, melancholy, quirky. . . . As cerebral as it is sensual.”
—The Boston Globe

“Funny and self-critical—[Immigrant, Montana] inverts and skewers the colonial narrative.”
—The New Yorker

“A bold and provocative counter-narrative. . . . Kumar writes with disarming honesty.”
—The Guardian

“Intelligent and intimate. . . . Ambitious artistic undertakings like Kumar’s are how the literature of exile secures its place in the new country.”
—The Millions

“Droll and exhilarating. . .this coming-of-age-in-the-city story is bolstered by the author’s captivating prose, which keeps it consistently surprising and hilarious. . . . An inventive delight.”
—Publishers Weekly (starred review)

“[A] remarkable novel. . .with surprising twists and turns.”
—New York Journal of Books

“Kumar [is] a keen observer of the contemporary American immigrant experience. . . . A droll and inventive tale for the intellectually omnivorous.”
—The Chronogram