Out of Our Minds: What We Think and How We Came to Think It (Hardcover) 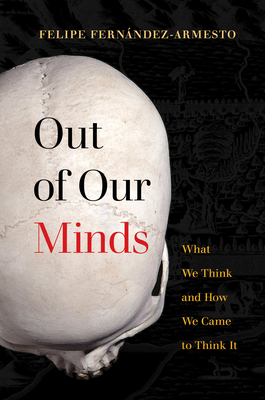 Out of Our Minds: What We Think and How We Came to Think It (Hardcover)


On Our Shelves Now
"A stimulating history of how the imagination interacted with its sibling psychological faculties—emotion, perception and reason—to shape the history of human mental life."—The Wall Street Journal

To imagine—to see what is not there—is the startling ability that has fueled human development and innovation through the centuries. As a species we stand alone in our remarkable capacity to refashion the world after the picture in our minds.

Traversing the realms of science, politics, religion, culture, philosophy, and history, Felipe Fernández-Armesto reveals the thrilling and disquieting tales of our imaginative leaps—from the first Homo sapiens to the present day. Through groundbreaking insights in cognitive science, Fernández-Armesto explores how and why we have ideas in the first place, providing a tantalizing glimpse into who we are and what we might yet accomplish. Unearthing historical evidence, he begins by reconstructing the thoughts of our Paleolithic ancestors to reveal the subtlety and profundity of the thinking of early humans. A masterful paean to the human imagination from a wonderfully elegant thinker, Out of Our Minds shows that bad ideas are often more influential than good ones; that the oldest recoverable thoughts include some of the best; that ideas of Western origin often issued from exchanges with the wider world; and that the pace of innovative thinking is under threat.
Felipe Fernández-Armesto is an award-winning historian and the author of several bestselling books, including 1492, Ideas that Changed the World, and The Americas. He lives in Indiana and is a professor of history at the University of Notre Dame.
“Opposing a lemming-like rush to despair, this scholar concludes by suggesting pluralism as paradoxically 'the one doctrine that can unite us.' How long cherished diversity resists the imperious convergence of a monoculture remains to be seen, or feared. For conformity silences our imaginations.”
— PopMatters

"Mr. Fernandez-Armesto offers a stimulating history of how the imagination interacted with its sibling psychological faculties—emotion, perception and reason?—to shape the history of human mental life."
— Andrew Stark,

"A fascinating, and provocative, global history of ideas . . . Essential."
— CHOICE

"Beginning with cognitive science, this global survey sweeps through leaps of thought from prehistory to today — a journey from unification to uncertainty, lit by minds such as China’s fourth-century-bc master of paradox Hui Shi and paradigm-smashing mathematician Henri Poincaré. Today, Fernández-Armesto argues, the trend is shifting as our homogenized ‘global culture’ threatens the very exchanges that spark heroic ideas."
— Barbara Kiser,

“Out of Our Minds covers the range of human ideas, from prehistoric man’s preoccupations to artificial intelligence. But the focus is on topics like the emergence of scientific truth and democracy—themes that seem under threat today, with talk of 'fake news' and authoritarians on the march.”
— Economist

“Out of Our Minds is more than a clever title. It plays with human self-importance and takes us down a peg or two. Fernández-Armesto has a love/hate relationship with our intellectual history and works out his frustrations in superb detail.”
— Sydney Morning Herald

“An outline of ideas runs the risk of being cursory — one damn intellectual after another — but [Armesto’s] easy flow from thinker to thinker, economics to ethics, microbes and their mutations to climate, means that there’s variety and interest all along the way. He’s usefully judgmental: he has a personal take on existentialism and the youth culture of the Sixties, for instance. What we get here is an urbane and civilised observer, broad in his sympathies, mildly distrustful of religion, very distrustful of certainties and enthusiastic about pluralism. You may not always agree with him, but he’s very good company.”
— Evening Standard

"Rich in content and interpretive brio that will appeal to general readers interested in the history of ideas."
— Middle Journal