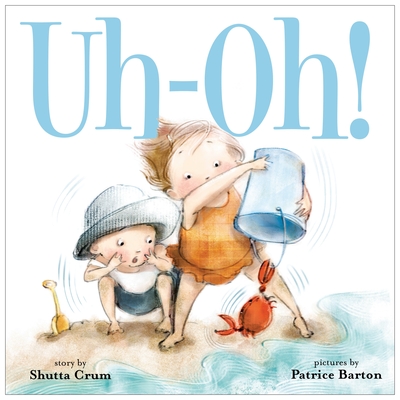 A charming summer board book that's just right for toddlers, from the team behind the critically acclaimed picture book Mine!

This nearly wordless story of toddler adventure perfectly captures the dynamics between the youngest friends and the sheer pleasure of that favorite toddler word: Uh-Oh!

Shutta Crum’s first nearly wordless picture book, Mine!, also illustrated by Patrice Barton and starring the same children, was called “a delightful example of the drama and emotion that a nearly wordless book can convey” by the New York Times. Her other books include Bravest of the Brave and Thomas and the Dragon Queen. Learn more about Shutta at shuttacrum.com.

Patrice Barton has illustrated many picture books, including I Pledge Allegiance by Pat Mora and Libby Martinez, Rosie Sprout’s Time to Shine by Allison Wortche, I Like Old Clothes by Mary Ann Hoberman, and, of course, Mine! You can find out more about Patrice at patricebarton.com.