The Plant Messiah: Adventures in Search of the World's Rarest Species (Hardcover) 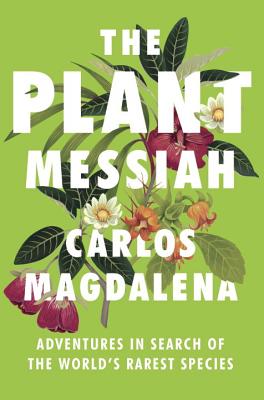 The Plant Messiah: Adventures in Search of the World's Rarest Species (Hardcover)


Email or call for price.
"A thrilling and inspirational account of adventures in the botanical world" (Wall Street Journal)

Carlos Magdalena is not your average horticulturist. He's a man on a mission to save the world's most endangered plants. First captivated by the flora of his native Spain, he has travelled to the remotest parts of the globe in search of exotic species. Renowned for his pioneering work, he has committed his life to protecting plants from man-made ecological destruction and thieves hunting for wealthy collectors.

In The Plant Messiah, Magdalena takes readers from the Amazon to the jungles of Mauritius to deep within the Australian Outback in search of the rare and the vulnerable. Back in the lab, we watch as he develops groundbreaking, left-field techniques for rescuing species from extinction, encouraging them to propagate and thrive once again. Along the way, he offers moving, heartfelt stories about the secrets contained within these incredible organisms.

Passionate and absorbing, The Plant Messiah is a tribute to the diversity of life on our planet, and the importance of preserving it.

*Featuring 16 pages of color photos*
Carlos Magdalena is the Tropical Senior Botanical Horticulturist at the Royal Botanic Gardens, Kew, and an international lecturer. He is renowned for his unique skills as a plant propagator who is saving the world’s rarest plants.
"A gripping account . . . The work done by Magdalena and others like him is nothing short of miraculous. [The Plant Messiah] illustrates just how much can be done to save even species that all but the greatest optimist would consider doomed."
—The New York Review of Books

“[I]t is fascinating to follow Magdalena as he travels from remote Australian billabongs full of rare water lilies to the dry forests of western Peru, where the last gnarled huarango trees grow in the shadow of the Andes. But the greater accomplishment of The Plant Messiah is the compelling case that Magdalena makes from caring about plants in general.”
—Los Angeles Times

“The Plant Messiah’s storytelling structure and loving descriptions of rare plants are an unabashed appeal to emotion, attempting to light the same passion for the living world in Magdalena’s readers.”
—Los Angeles Review of Books

“In a world whose ecology is changing so fast, only a special kind of obsessive would concern himself with saving endangered plant species. That’s Magdalena... who recounts adventures that have taken him from the Amazon to the jungles of Mauritius on a quest to preserve as much flora as he can.”
—New York Times Book Review

"For anyone who might have considered plants dull stuff, Mr. Magdalena delivers a thrilling and inspirational account of adventures in the botanical world."
—Wall Street Journal

“An entertaining, planterly romp around the world and a glimpse inside one of the world's great botanical institutions.”
—Financial Times

“Magdalena’s claim to be a green-fingered Jesus has its merits. His record of propagating plants that others have consigned to botanical history is impressive. . . .  Some 30,000 plants have recorded uses for humans. Most people, the messiah preaches, are blind to these everyday miracles. This book will teach them to see.”
—The Economist

“This full-throttle memoir is a window on the exploits that underpin the Royal Botanic Gardens, Kew . . . [His quests] reveal the rare mix of zeal and patience needed to hunt vanishing plants.”
—Nature

“This book about Magdalena’s hunt for an endangered plant is as much about the wild places (like the Amazon) he journeys through.”
—Chicago Review of Books (The Best Nature Writing of 2018 So Far)

“A page-turner exalting biodiversity... a memoir of a plant­-obsessed man [including] warm, familial stories of his Spanish childhood and scores of knuckle-biting, worldwide adventures of a modern-day plant hunter.”
—Library Journal

"Bound to enthrall readers and get them thinking more fully about plants."
—Publishers Weekly (starred review)

“A book that will inspire wonder, even hope.”
—Booklist

“Magdalena's excitement about plants and their propagation is contagious, and even those lacking green thumbs should be fascinated by his travels and adventures in science.”
—Kirkus

“Not everyone imagines plants to be much fun. But for Spanish horticulturist Carlos Magdalena, also known as the Plant Messiah, the secret lives of plants are fascinating…Magdalena’s poetic prose and attention to detail drew me in.”
—Earther

“Carlos Magdalena is a man on a mission: to rescue and propagate the world's disappearing plants, and to spread the gospel of conservation . . . Throughout the book, Magdalena returns to his key message: plants are vital to the health and survival of our planet, and all of them (or as many as possible) must be saved.”
—Shelf Awareness

“An inspirational and suspenseful memoir of his botanical adventures and plant advocacy. He effectively alerts the reader to the dangers of ‘plant blindness’.”
—The Missourian

“The Plant Messiah reads like a detective novel. . . . [This] is a thrillingly uplifting book. . . . There is a beguiling energy to his prose that clearly he has in person.”
—Daily Mail (UK)

“Carlos has been able to achieve things with plants that no one else can do.”
—Richard Barley, director of horticulture, Royal Botanic Garden, Kew

“Carlos is an inspiration to me. He's the perfect spokesperson for the plants of the world.”
—Jane Goodall, primatologist and UN Messenger of Peace