In the Land of the Cyclops: Essays (Paperback) 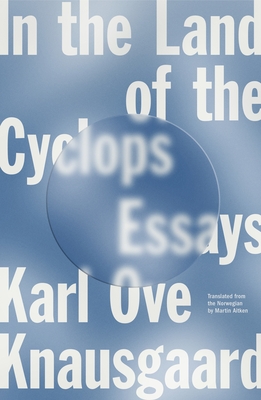 In the Land of the Cyclops: Essays (Paperback)

From the New York Times bestselling author of the My Struggle series comes a collection of ambitious, remarkably erudite essays on art, literature, culture, and philosophy.

In the Land of the Cyclops is Karl Ove Knausgaard's first collection of essays to be published in English. In these wide-ranging pieces, he reflects openly and with penetrating intelligence on Ingmar Bergman's notebooks, Anselm Kiefer, the northern lights, Madame Bovary, Rembrandt, and the role of an editor. Accompanied by black-and-white reproductions throughout, these essays illuminate Cindy Sherman's shadowlands, the sublime mystery of Sally Mann's vision, and the serious play of Francesca Woodman. They capture Knausgaard's remarkable ability to mediate between the personal and the universal, between life and art. Each piece glimmers with his candor and his longing to authentically see, understand, and experience the world.

Karl Ove Knausgaard was born in Norway in 1968. My Struggle has won countless international literary awards and has been translated into at least fifteen languages. Knausgaard lives in Sweden with his wife and four children.

Damion Searls is an American writer and translator. He grew up in New York and studied at Harvard University and the University of California, Berkeley. He specializes in translating literary works from Western European languages such as German, Norwegian, French, and Dutch. Among the authors he has translated are Marcel Proust, Rainer Maria Rilke, Robert Walser, Ingeborg Bachmann, Thomas Bernhard, Kurt Schwitters, Peter Handke, Jon Fosse, and Nescio.