The Kinship Of Secrets (Paperback) 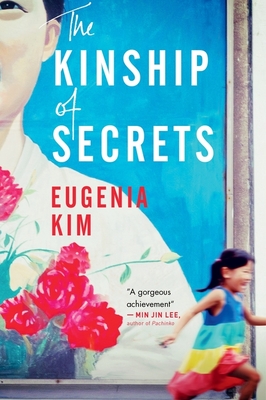 The Kinship Of Secrets (Paperback)


In stock at publisher: Usually Ships to store in 3-5 Business Days.
"A gorgeous achievement.”—Min Jin Lee, author of Pachinko

From the author of The Calligrapher’s Daughter comes the riveting story of two sisters, one raised in the United States, the other in South Korea, and the family that bound them together even as the Korean War kept them apart.

In 1948 Najin and Calvin Cho, with their young daughter Miran, travel from South Korea to the United States in search of new opportunities. Wary of the challenges they know will face them, Najin and Calvin make the difficult decision to leave their infant daughter, Inja, behind with their extended family; soon, they hope, they will return to her.

But then war breaks out in Korea, and there is no end in sight to the separation. Miran grows up in prosperous American suburbia, under the shadow of the daughter left behind, as Inja grapples in her war-torn land with ties to a family she doesn’t remember. Najin and Calvin desperately seek a reunion with Inja, but are the bonds of love strong enough to reconnect their family over distance, time, and war? And as deep family secrets are revealed, will everything they long for be upended?

Told through the alternating perspectives of the distanced sisters, and inspired by a true story, The Kinship of Secrets explores the cruelty of war, the power of hope, and what it means to be a sister.
EUGENIA KIM’s debut novel, The Calligrapher’s Daughter, won the 2009 Borders Original Voices Award, was shortlisted for the Dayton Literary Peace Prize, and was a critics’ pick by The Washington Post. Her stories have appeared in Asia Literary Review, Washington City Paper, Raven Chronicles, and elsewhere. Kim teaches in Fairfield University’s MFA Creative Writing Program and lives in Washington, DC.

A November 2018 LibraryReads Pick?    NAMED A BEST BOOK FOR FALL BY:  The Associated Press * Amazon * BookRiot * BookBub * Refinery29 * Bustle * Nylon * Southern Living   "A graceful, poignant, and moving portrayal of one family’s struggle to remain a family through decades of war, migration, and separation."  —Viet Thanh Nguyen, Pulitzer Prize-winning author of The Sympathizer   “Eugenia Kim’s The Kinship of Secrets is a beautiful allegory of loss and recovery. Through the parallel growth of two separated sisters, Kim bears witness to the fall and rise of a nation and its resilient and generous people. The Kinship of Secrets is a gorgeous achievement.” —Min Jin Lee, author of Pachinko and Free Food for Millionaires   “Beautifully illuminate[s] Korea’s past in ways that inform our present....Kim infuses a coming-of-age story about being an outsider with the realities of the war, which forced many family separations, some of which still persist today.” —Washington Post   “Insightful . . . Poignant and richly evocative of both Korea and the immigrant experience.”—Sunday Times (London)   “Eugenia Kim’s second novel takes place in 20th-century Korea but shines a light on problems of migration and family that feel ever-more urgent here and now. The Kinship of Secrets is an empathetic and moving look at a close family divided by conflict and change...most of the novel’s considerable appeal comes from the way Kim maps lines of identity, kin and culture: never oversimplifying, always taking her characters in unexpected directions.” –Ms. Magazine   "Heartfelt...will greatly appeal to readers who enjoy the multicultural novels of Lisa See and Amy Tan, stories that enlighten as well as entertain."—Booklist, STARRED REVIEW   “Covering such a broad span of history is an ambitious undertaking…drawn from her own family history, Kim’s story unfolds with the weight of lived experience. Through these relationships, The Kinship of Secrets explores the meaning of love and sacrifice and how often they are one and the same.” –BookPage   “An emotionally wrought and elegantly written novel about longing and belonging, and the trials of rebuilding a country and reforming a family.” –The National   "Brilliant." —Asian Review of Books   “Finely wrought…A stirring novel about family and the sacrifices made to keep it whole.”  —Publishers Weekly   “Elegant…a valuable window into Korean history as well as to issues like immigration and assimilation that couldn’t be more relevant today.” —Kirkus Reviews   "Kim is a true storyteller, and her latest work is engaging throughout. Readers who enjoy family sagas by Lisa See and Jamie Ford will appreciate this one.” —Library Journal   "Eugenia Kim succeeds in crafting intimacy in her story and characters...The Kinship of Secrets evokes the feeling of humanity and what it means to be family." —Jakarta Post   "I felt as though I had stepped into a graceful story of two countries, South Korea and America, and family ties that survive the challenges of histor —