Pale Blue Dot: A Vision of the Human Future in Space (Paperback) 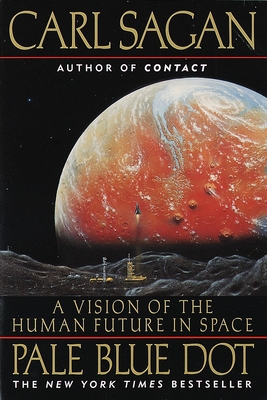 Pale Blue Dot: A Vision of the Human Future in Space (Paperback)

In Cosmos, the late astronomer Carl Sagan cast his gaze over the magnificent mystery of the Universe and made it accessible to millions of people around the world. Now in this stunning sequel, Carl Sagan completes his revolutionary journey through space and time.

Future generations will look back on our epoch as the time when the human race finally broke into a radically new frontier—space. In Pale Blue Dot, Sagan traces the spellbinding history of our launch into the cosmos and assesses the future that looms before us as we move out into our own solar system and on to distant galaxies beyond. The exploration and eventual settlement of other worlds is neither a fantasy nor luxury, insists Sagan, but rather a necessary condition for the survival of the human race.

“Takes readers far beyond Cosmos . . . Sagan sees humanity’s future in the stars.”—Chicago Tribune
Carl Sagan served as the David Duncan Professor of Astronomy and Space Sciences and Director of the Laboratory for Planetary Studies at Cornell University. He played a leading role in the Mariner, Viking, Voyager, and Galileo spacecraft expeditions, for which he received the NASA Medals for Exceptional Scientific Achievement and (twice) for Distinguished Public Service.

His Emmy- and Peabody–winning television series, Cosmos, became the most widely watched series in the history of American public television. The accompanying book, also called Cosmos, is one of the bestselling science books ever published in the English language. Dr. Sagan received the Pulitzer Prize, the Oersted Medal, and many other awards—including twenty honorary degrees from American colleges and universities—for his contributions to science, literature, education, and the preservation of the environment. In their posthumous award to Dr. Sagan of their highest honor, the National Science Foundation declared that his “research transformed planetary science . . . his gifts to mankind were infinite." Dr. Sagan died on December 20, 1996.