Hubris: The Inside Story of Spin, Scandal, and the Selling of the Iraq War (Paperback) 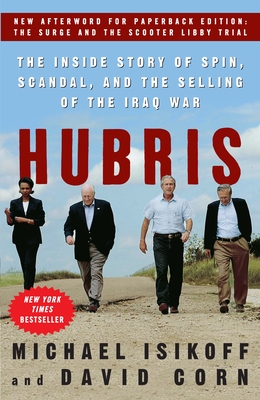 Hubris: The Inside Story of Spin, Scandal, and the Selling of the Iraq War (Paperback)


Email or call for price.
The real story behind the investigation of Iraq, and the basis for the MSNBC documentary of the same name hosted by Rachel Maddow

Filled with news-making revelations that made it a New York Times bestseller, Hubris takes us behind the scenes at the White House, CIA, Pentagon, State Department, and Congress to show how George W. Bush came to invade Iraq--and how his administration struggled with the devastating fallout.

Hubris connects the dots between Bush's expletive-laden outbursts at Saddam Hussein, the bitter battles between the CIA and the White House, the fights within the intelligence community over Saddam's supposed weapons of mass destruction, the outing of an undercover CIA officer, and the Bush administration's misleading sales campaign for war. Written by veteran reporters Michael Isikoff and David Corn, this is an inside look at how a president took the nation to war using faulty and fraudulent intelligence. It's a dramatic page-turner and an intriguing account of conspiracy, backstabbing, bureaucratic ineptitude, journalistic malfeasance, and arrogance.
Michael Isikoff is an award-winning investigative correspondent for Yahoo! News, a frequent guest on MSNBC and other cable news networks, and the author of the bestselling Uncovering Clinton.

David Corn is an American political journalist, and has been the Washington editor of The Nation and a Fox News Channel contributor. He is the author of the bestselling The Lies of George W. Bush, the novel Deep Background, and the biography Blond Ghost.
"Indispensable ... There have been many books about the Iraq War, and there will be many others before we are through. This one, however, pulls together with unusually shocking clarity the multiple failures of process and statecraft."
—WASHINGTON POST