Believe It or Snot: The Definitive Field Guide to Earth's Slimy Creatures (Does It Fart Series #3) (Hardcover) 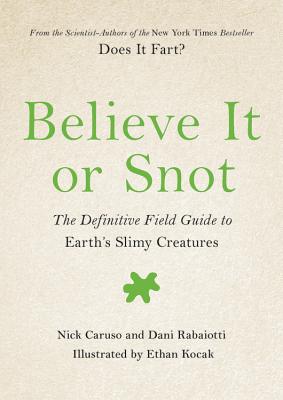 Believe It or Snot: The Definitive Field Guide to Earth's Slimy Creatures (Does It Fart Series #3) (Hardcover)

This is book number 3 in the Does It Fart Series series.

From the scientist duo behind the New York Times bestselling sensation Does It Fart? and their excremental follow up True or Poo?, Believe It Or Snot explores the myriad variety of slime in the animal and plant kingdoms.

Your little brother isn't the only nose-picking animal.
What is hyena butter and would it be appropriate to spread on toast? Why is giraffe saliva such a good lubricant? How does some mollusk mucus work like a fishing pole? And what's the deal with pygmy sperm whales' "anal syrup?"
In Believe It or Snot, scientists and bestselling authors Nick Caruso and Dani Rabaiotti detail the slimy secrets of 80 organisms that ooze, drip, dribble, and splatter. Not quite a solid but firmer than a liquid, slime is used by plants and animals for defense, respiration, movement, feeding, communication, and even reproduction. Slime, you might say, is the glue that holds our world together.

But that leaves an important question: which creature is earth's slimiest?

In this book, the authors dive into the goo and come up with a definitive ranking of earth's slimiest creatures-while offering up a plethora of facts about the natural world's ooze, gunge, sludge, gunk, and goop.

Dani Rabaiotti is a researcher and science communicator at the Zoological Society of London, where she studies the impact of climate change on African wild dogs. While her research has involved fieldwork in Kenya, Dani spends most of her time in London at a computer, coding-less glamorous but considerably less slimy.

Nick Caruso is a postdoctoral associate in the Department of Fish and Wildlife Conservation at Virginia Tech. His research focuses on ecology and conservation of Appalachian salamanders and of herpetofauna in the Florida panhandle. When he is not researching amphibians and reptiles or writing books about farts, poos or snot, he's mountain biking with his wife, playing racquetball or soccer, or cuddling his cats.

"Believe It or Snot serves up oozing helpings of helpful facts about Earth's slimiest organisms."
—LiveScience.com