Hell In A Very Small Place: The Siege Of Dien Bien Phu (Paperback) 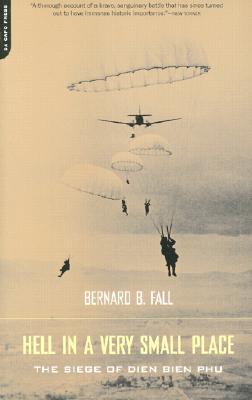 Hell In A Very Small Place: The Siege Of Dien Bien Phu (Paperback)


In stock at publisher: Usually Ships to store in 3-5 Business Days.
From the acclaimed scholar and reporter, a thorough and revealing account of the historic turning point in Vietnam's long struggle--the 1954 battle for Dien Bien Phu

Like Gettysburg, Stalingrad, Midway, and Tet, the battle at Dien Bien Phu--a strategic attack launched by France against the Vietnamese in 1954 after eight long years of war--marked a historic turning point. By the end of the 56-day siege, a determined Viet Minh guerrilla force had destroyed a large, tactical French colonial army in the heart of Southeast Asia. The Vietnamese victory would not only end French occupation of Indochina and offer a sobering premonition of the U.S.'s future military defeat in the region, but would also provide a new model of modern warfare on which size and sophistication didn't always dictate victory.

Before his death in Vietnam in 1967, Bernard Fall, a critically acclaimed scholar and reporter, drew upon declassified documents from the French Defense Ministry and interviews with thousands of surviving French and Vietnamese soldiers to weave a compelling account of the key battle of Dien Bien Phu. With maps highlighting the strategic points of conflict, with thirty-two pages of photos, and with Fall's thorough and insightful analysis, Hell in a Very Small Place has become one of the benchmarks in war reportage.

Bernard B. Fall was forty when he was killed in South Vietnam in 1967. The author of the classic Vietnam account, Street Without Joy, he wrote for the New York Times and the Washington Post.
"A thorough account of a brave, sanguinary battle that has since turned out to have immense historic importance."--New Yorker