A Military History Of The Western World, Vol. II: From The Defeat Of The Spanish Armada To The Battle Of Waterloo (Paperback) 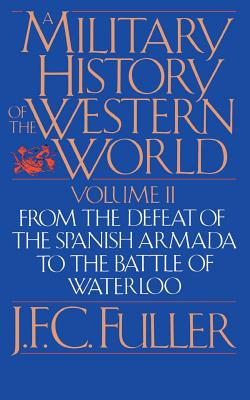 A Military History Of The Western World, Vol. II: From The Defeat Of The Spanish Armada To The Battle Of Waterloo (Paperback)


In stock at publisher: Usually Ships to store in 3-5 Business Days.
Major General J. F. C. Fuller, a pioneer of mechanized warfare in Great Britain, was one of this century's most renowned military strategists and historians. In this magisterial work he spans military history from the Greeks to the end of World War II, describing tactics, battle lines, the day-to-day struggles while always relating affairs on the field to the larger questions of social, political, and economic change in Western civilization. A masterpiece of scholarship and biting prose, these volumes are available for the first time in a handsome trade paperback edition. This second volume describes the 16th-century rivalry between England and Spain, the Thirty Years War, struggle between France and England, American Revolutionary War, and the rise and fall of Napoleon.

Major General J. F. C. Fuller (1878-1966) was one of the most important and original military thinkers of this century. He served as lieutenant in the Boer War, organized the first British tank corps in World War I, and developed the strategy and tactics of tank warfare which were later put to such effective use by the Nazis for their World War II blitzkriegs. His many books include A Military History of the Western World (3 volumes), The Generalship of Ulysses S. Grant, Julius Caesar: Man, Soldier, and Tyrant, and The Generalship of Alexander the Great, all of which are available from Da Capo Press.