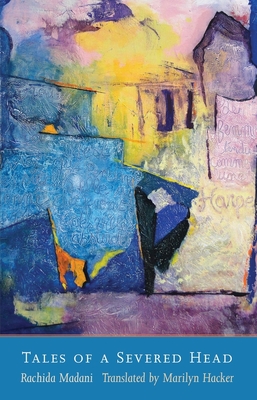 A brilliant retelling of the classic Arab tale of Scheherazade, set in the present day

This volume brings Moroccan poet Rachida Madani's remarkable poems to English-language readers for the first time. In Tales of a Severed Head, Madani addresses present-day issues surrounding the role of women in society—issues not unlike those explored a thousand years ago in the enduring collection of Arab tales known as The Thousand and One Nights.

In the ancient tales, the insanely distrustful King Shehriyar vows to marry a new wife each night and have her beheaded the next morning, thus eliminating the risk of being cuckolded. Through the courage and wit of young Scheherazade, who volunteers to be the king's bride and then invents the legendary tales that go on for a thousand and one nights, Shehriyar is healed of his obsession and the kingdom's virgins are saved. Like her brave-hearted predecessor, Madani's modern-day Scheherazade is fighting for her own life as well as the lives of her fellow sufferers. But in today's world, the threat comes as much from poverty, official corruption, the abuse of human rights, and the lingering effects of colonialism as from the power wielded by individual men. Madani weaves a tale of contemporary resistance, and once again language provides a potent weapon.

Rachida Madani, a native of Morocco, has published several volumes of poetry in French, a language she taught for thirty years. A lifelong political militant, she expresses her resistance "not by shouting slogans and waving banners. I fight with my words." She lives in Tangiers. Marilyn Hacker is a poet, translator, and critic. For her work she has received a National Book Award, a PEN Award for Poetry in Translation, and a PEN/Voelcker Award for Poetry, among other prizes. She lives in Paris.

"Hacker’s translations of Madani’s poems are fueled by her love of language; indeed, this is the work of a poet and translator who deeply believes in language as a means of transformation and imagination."—Warscapes
— Warscapes