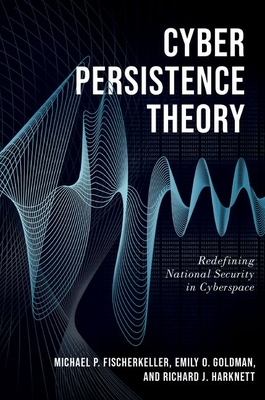 
In stock at publisher: Usually Ships to store in 3-5 Business Days.
A bold re-conceptualization of the fundamentals driving behavior and dynamics in cyberspace. Most cyber operations and campaigns fall short of activities that states would regard as armed conflict. In Cyber Persistence Theory, Michael P. Fischerkeller, Emily O. Goldman, and Richard J. Harknett argue that a failure to understand this strategic competitive space has led many states to misapply the logic and strategies of coercion and conflict to this environment and, thus, suffer strategic loss as a result. The authors show how the paradigm of deterrence theory can neither explain nor manage the preponderance of state cyber activity. They present a new theory that illuminates the exploitive, rather than coercive, dynamics of cyber competition and an analytical framework that can serve as the basis for new strategies of persistence. Drawing on their policy experience, they offer a new set of prescriptions to guide policymakers toward a more stable, secure cyberspace.

Michael Fischerkeller is a research staff member in the Information, Technology and Systems Division at the Institute for Defense Analyses, a Federally Funded Research and Development Center. Michael has spent his entire professional career supporting the Office of the Secretary of Defense, Joint Chiefs of Staff, Combatant and Multi-National Force commanders, and the Intelligence Community. His areas of expertise are cyber strategy, strategic / operational concept development, and analysis / assessment. Emily O. Goldman serves as a strategist at US Cyber Command and a thought leader on cyber policy. She was cyber advisor to the Director of Policy Planning at the Department of State, 2018-19. From 2014 to 2018, she directed the US Cyber Command / National Security Agency Combined Action Group, reporting to a four-star commander and leading a team that wrote the 2018 US Cyber Command vision, Achieve and Maintain Cyberspace Superiority. She has also worked as a strategic communications advisor for US Central Command and for the Coordinator for Counterterrorism at the State Department. She holds a doctorate in Political Science from Stanford University and was a Professor of Political Science at the University of California, Davis, for two decades. Dr. Goldman has published and lectured widely on strategy, cybersecurity, arms control, military history and innovation, and organizational change. Richard J. Harknett is Professor and Director of the School of Public and International Affairs at the University of Cincinnati. He also co-directs the Ohio Cyber Range Institute, a state-wide organization supporting education, workforce, economic, and research development in cybersecurity. He served as Scholar-in-Residence at US Cyber Command and National Security Agency and has held two Fulbright Professor positions.