The Odd 1s Out: How to Be Cool and Other Things I Definitely Learned from Growing Up (Paperback) 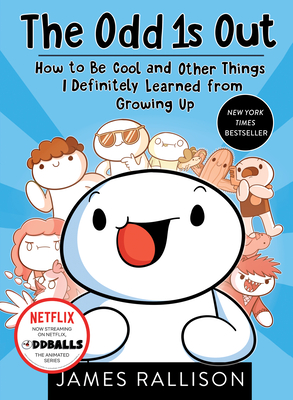 The Odd 1s Out: How to Be Cool and Other Things I Definitely Learned from Growing Up (Paperback)

Instant New York Times bestseller · Hilarious stories and advice about the ups and downs of growing up, from a popular YouTube artist and storyteller.

Like any shy teen turned young adult, YouTube star James Rallison ("The Odd 1s Out") is used to being on the outside looking in. He wasn't partying in high school or winning football games like his older brother. Instead, he posted comics on the Internet. Now, he's ready to share his hard-earned advice from his 21 years of life in the funny, relatable voice his fans love.

In this illustrated collection, Rallison tells his own stories of growing up as the "odd one out": in art class with his twin sister (she was more talented), in the middle school locker room, and up to one strange year of college (he dropped out). Each story is filled with the little lessons he picked up along the way, serious and otherwise, like:

*  How to be cool (in seventh grade)
*  Why it's OK to be second-best at something, and
*  How to survive your first, confidence-killing job interviews

Filled with fan-favorite comics and never-before-seen material, this tongue-in-cheek take on some of the weirdest, funniest parts of life is perfect for both avid followers and new converts.
JAMES RALLISON has been drawing comics since he was eight years old. At age sixteen James created the webcomic The Odd 1s Out, which now comprises over 300 comics and has expanded into a YouTube channel with more than 13 million subscribers. He lives in California.