The Poison Squad: One Chemist's Single-Minded Crusade for Food Safety at the Turn of the Twentieth Century (Paperback) 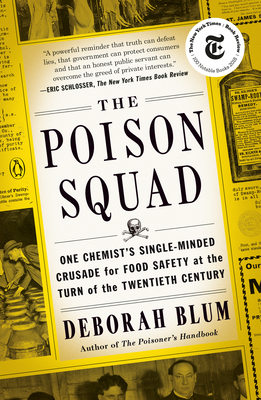 The Poison Squad: One Chemist's Single-Minded Crusade for Food Safety at the Turn of the Twentieth Century (Paperback)


On Our Shelves Now: We will email when ready for pick up
A New York Times Notable Book

The inspiration for PBS's AMERICAN EXPERIENCE film The Poison Squad.

From Pulitzer Prize winner and New York Times-bestselling author Deborah Blum, the dramatic true story of how food was made safe in the United States and the heroes, led by the inimitable Dr. Harvey Washington Wiley, who fought for change

By the end of nineteenth century, food was dangerous. Lethal, even. "Milk" might contain formaldehyde, most often used to embalm corpses. Decaying meat was preserved with both salicylic acid, a pharmaceutical chemical, and borax, a compound first identified as a cleaning product. This was not by accident; food manufacturers had rushed to embrace the rise of industrial chemistry, and were knowingly selling harmful products. Unchecked by government regulation, basic safety, or even labelling requirements, they put profit before the health of their customers. By some estimates, in New York City alone, thousands of children were killed by "embalmed milk" every year. Citizens--activists, journalists, scientists, and women's groups--began agitating for change. But even as protective measures were enacted in Europe, American corporations blocked even modest regulations. Then, in 1883, Dr. Harvey Washington Wiley, a chemistry professor from Purdue University, was named chief chemist of the agriculture department, and the agency began methodically investigating food and drink fraud, even conducting shocking human tests on groups of young men who came to be known as, "The Poison Squad."

Over the next thirty years, a titanic struggle took place, with the courageous and fascinating Dr. Wiley campaigning indefatigably for food safety and consumer protection. Together with a gallant cast, including the muckraking reporter Upton Sinclair, whose fiction revealed the horrific truth about the Chicago stockyards; Fannie Farmer, then the most famous cookbook author in the country; and Henry J. Heinz, one of the few food producers who actively advocated for pure food, Dr. Wiley changed history. When the landmark 1906 Food and Drug Act was finally passed, it was known across the land, as "Dr. Wiley's Law."

Blum brings to life this timeless and hugely satisfying "David and Goliath" tale with righteous verve and style, driving home the moral imperative of confronting corporate greed and government corruption with a bracing clarity, which speaks resoundingly to the enormous social and political challenges we face today.
Deborah Blum is director of the Knight Science Journalism Program at MIT, and editor of Undark magazine, (undark.org). In 1992, she won the Pulitzer Prize for a series on primate research, which she turned into a book, The Monkey Wars. Her other books include The Poisoner's Handbook, Ghost Hunters, Love at Goon Park, and Sex on the Brain. She has written for publications including The New York Times, Wired, Time, Discover, Mother Jones, The Guardian and The Boston Globe. Blum is a past president of the National Association of Science Writers, a fellow of the American Association for the Advancement of Science, and a lifetime associate of the National Academy of Sciences.
Full of fascinating detail . . . a valuable contribution to understanding the politics of food.”—Nature

“[Blum’s] prose is graceful, and her book is full of vivid, unsettling detail. . . . The Poison Squad offers a powerful reminder that truth can defeat lies, that government can protect consumers and that an honest public servant can overcome the greed of private interests.”—Eric Schlosser, New York Times Book Review

“A detailed, highly readable history of food and drink regulation in the United States. . . . [THE POISON SQUAD] shows the push and pull of competing economic, political and social interests. The journey our country has taken in establishing food, drink and drug regulation is an important one to understand because it is still going on.”—Wall Street Journal

“Riveting. . . . Blum isn’t just telling one scientist’s story but a broader one about the relationship between science and society. . . . [A] timely tale about how scientists and citizens can work together on meaningful consumer protections.”—Science magazine

“[E]ngrossing. . . .  Blum’s well-informed narrative—complete with intricate battles between industry lobbyists and a coalition of scientists, food activists, and women’s groups—illuminates the birth of the modern regulatory state and its tangle of reformist zeal, policy dog-fights, and occasional overreach. . . . [A] page-turner.”—Publishers Weekly

“Fascinating. . . . The Pure Food and Drug Act of 1906 ended a century of scandal and bitter political maneuvering, with major impetus from Harvey Washington Wiley, a genuinely unknown American hero. Pulitzer Prize-winning journalist Blum offers less a biography than a vivid account of Wiley’s achievements. . . . An expert life of an undeservedly obscure American.”—Kirkus