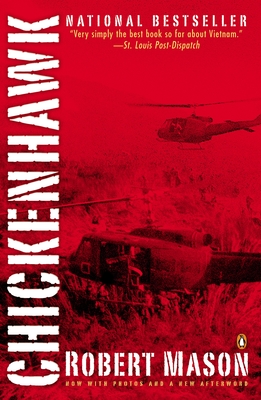 
In stock at publisher: Usually Ships to store in 3-5 Business Days.
A true, bestselling story from the battlefield that faithfully portrays the horror, the madness, and the trauma of the Vietnam War

More than half a million copies of Chickenhawk have been sold since it was first published in 1983. Now with a new afterword by the author and photographs taken by him during the conflict, this straight-from-the-shoulder account tells the electrifying truth about the helicopter war in Vietnam. This is Robert Mason’s astounding personal story of men at war. A veteran of more than one thousand combat missions, Mason gives staggering descriptions that cut to the heart of the combat experience: the fear and belligerence, the quiet insights and raging madness, the lasting friendships and sudden death—the extreme emotions of a "chickenhawk" in constant danger.

"[Chickenhawk]'s vertical plunge into the thickets of madness will stune readers." -Time

"More than any other writer, Mason has been able to capture the feeling of what it was like to be there." -The Philadelphia Inquirer

"Better than any movie about the war." -Boston Herald