Remember the Ramrods: An Army Brotherhood in War and Peace (Hardcover) 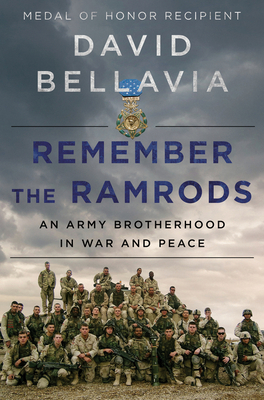 Remember the Ramrods: An Army Brotherhood in War and Peace (Hardcover)

In 2004, he stormed an enemy stronghold to save his platoon. Fourteen years later, his unit reunited and saved him. This is their story.

“Acting on instinct to save the members of his platoon from an imminent threat, Staff Sergeant Bellavia ultimately cleared an entire enemy-filled house.” So reads the Medal of Honor citation describing one of the Iraq War’s most celebrated acts of heroism. But the full story of the brotherhood at the heart of these events is untold—and far more remarkable.

In 2004, David Bellavia’s U.S. Army unit, an infantry bat­talion known as the Ramrods—2nd Battalion, 2nd Infantry Regiment, 1st Infantry Division—fought and helped win the Battle of Fallujah, the bloodiest episode of the Iraq War. On November 10, 2004, Bellavia single-handedly cleared a forti­fied enemy position that had pinned down a squad from his platoon. Fourteen years later, Bellavia got a call from the pres­ident of the United States: he had been awarded a Medal of Honor for his actions in Fallujah and would receive America’s highest award for bravery in combat during a ceremony at the White House.

The news was not welcome. Bellavia had put the war behind him, created a quiet life for himself in rural western New York, and lost touch with most of his fellow Ramrods, who were once like brothers to him. The first time they gath­ered as a unit after the war was at Bellavia’s medal ceremony, six days in Washington, D.C., that may have saved them all. As they revisited what they had seen and done in battle and revealed to one another their journeys back into civilian life, they discovered that the bonds had not been broken by time. A decoration for one became a healing event for all.

This book—beginning in brutal war and ending with this momentous, transformative reunion—covers the journey of Bellavia’s platoon through fifteen years. A quintessential and timeless American tale, it is the story of how forty battle-hardened soldiers became ordinary citizens again; what they did during that time, and how November 10, 2004, rattled within them; and how their reunion brought them home at last.

Staff Sergeant David Bellavia spent six years in the U.S. Army, including some of the most intense fighting of the Iraq War. He has been awarded the Silver Star and Bronze Star for his actions in Iraq, and recommended for the Distinguished Service Cross and Medal of Honor for his actions in Fallujah. In 2005, he received the Conspicuous Service Cross (New York State's highest award for military valor) and was inducted into the New York State Senate Veterans Hall of Fame. He is the cofounder of Vets for Freedom, an advocacy organization of veterans concerned about the politicization of media coverage of military operations in Iraq and Afghanistan. His writing has been published in The Philadelphia Inquirer, National Review, The Weekly Standard, and other publications. He lives in western New York.