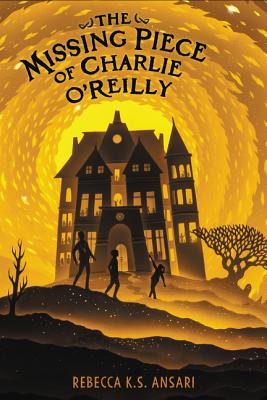 This book is one of the best books I’ve ever read (And that’s a lot of books!). The title tells us that something… something, is missing from Charlie. Charlie just wants his little brother back. He also has a friend named Ana. He takes baseball, has a nice coach named Jonathon, and has a mother who has been dealing with severe depression. He finds out where his brother is, only to get stuck there himself! The genre is part fantasy, part mystery, and action-adventure. It was so good I couldn’t describe it! I loved all of it, and I strongly recommend this book for the bookstore.

“As puzzle pieces click into place, The Missing Piece of Charlie O’Reilly reveals that it’s stories—and family—that make us whole. A deeply satisfying and beautiful book.” —Elana K. Arnold, National Book Award finalist and author of The Question of Miracles

Charlie O’Reilly is an only child. Which is why it makes everyone uncomfortable when he talks about his brother.

Liam. His eight-year-old kid brother, who, up until a year ago, slept in the bunk above Charlie, took pride in being as annoying as possible, and was the only person who could make Charlie laugh until it hurt.

Then came the morning when the bunk, and Liam, disappeared forever. No one even remembers him—not Charlie’s mother, who has been lost in her own troubles; and not Charlie’s father, who is gone frequently on business trips. The only person who believes Charlie is his best friend, Ana—even if she has no memory of Liam, she is as determined as Charlie is to figure out what happened to him.

The search seems hopeless—until Charlie receives a mysterious note, written in Liam’s handwriting. The note leads Charlie and Ana to make some profound discoveries about a magic they didn’t know existed, and they soon realize that if they're going to save Liam, they may need to risk being forgotten themselves, forever.

Rebecca K.S. Ansari’s debut novel is a stunning contemporary fantasy about love, loss, and the power to forgive that we all have inside us—even if we sometimes forget that it’s there.

Rebecca K. S. Ansari is a former ER doctor. The Missing Piece of Charlie O’Reilly is her first book. She lives in Minnesota with her husband, four sons, and some seriously massive pets. You can visit her online at www.rebeccaansari.com.

“As puzzle pieces click into place, The Missing Piece of Charlie O’Reilly reveals that it’s stories—and family—that make us whole. A deeply satisfying and beautiful book.”
— Elana K. Arnold, National Book Award finalist and author of The Question of Miracles

“This is a rich, unique, heart-wrenching book, crammed with layers of meaning and mystery.”
— Jacqueline West, New York Times bestselling author of The Collectors

“Readers will bite their nails and cheer for Charlie and his friends every step of the way. A nuanced villain adds depth and complexity to the story, and plot turns abound, both delightful and heartbreaking. An original premise, tear-jerker twists, and a touching message about forgiveness.”
— School Library Journal (starred review)

“Ansari trusts her audience with a complex narrative that traverses the breadth of time and the depths of self. The weave of guilt, family struggle, and forgiveness both complicates and complements questions of love and self-acceptance. Plot twists that’ll turn even veteran readers’ heads”
— Kirkus Reviews

“This gripping debut delivers a powerful message.”
— ALA Booklist